Jagalchi Market, located on the shoreside road in Busan’s Jung-gu, is Korea’s largest seafood market, selling both live and dried fish. After the Korean War the market solidified itself as a fish market.

This market represents Busan and is famous throughout the country. If you visit you can eat fresh raw fish right at the market. One of the iconic things you see on food travel shows or Youtube channels is getting a live octopus, having it cut up and eaten while still moving (replete with a tendril half-in, half-out of your mouth). It’s like the G-rated version of eating a tequila worm.

So, we were going to do this as a Family Fear Factor thing, but it was a little pricey and we were having cash-letting fatigue and decided that paying that much for a photo op wasn’t worth it. Looks like you’ll have to watch Andrew Zimmern instead! 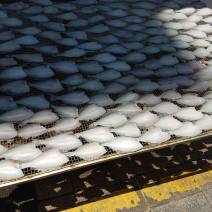 There are literally dozens of vendors selling very similar wares. We had originally thought we could buy some fresh fish and take it to a nearby restaurant to have it prepared. Along with the vendors, there are dozens of restaurants doing that anyway, making the process of picking out your food somewhat superfluous.

We chose our lunch eating spot based on a well-honed method of A) are there pictures with prices and 2) does someone speak toddler-level English in the establishment? We did make a tactical mistake in finding a traditional eatery which only had seating at low tables – meaning you sat on the floor. Normally, this might be ok, but I get really stiff spending hours walking and on my feet (which we had already done). I suggest if these establishments want to get more Western tourists in that they have a hot room so we can do some Bikram yoga prior to sitting for an hour.

The meal was various grilled fish accompanied with the typical pickled side dishes and a tasty light broth. We had no idea what the “XL” amount was so we ordered way too much food, only to perpetuate the notion of gluttonous Americans once again. The table next to us had the makkoli (rice wine) flowing, so they were becoming boisterous and, as we were getting ready to leave, finally spoke up to us (one of the group had lived in California a number of years).

The ubiquity of makkoli and the relative fervor the average Korean table drank it persuaded us to try some. We hated it. Sorry, Korea. There’s a reason why Zima is making a comeback.