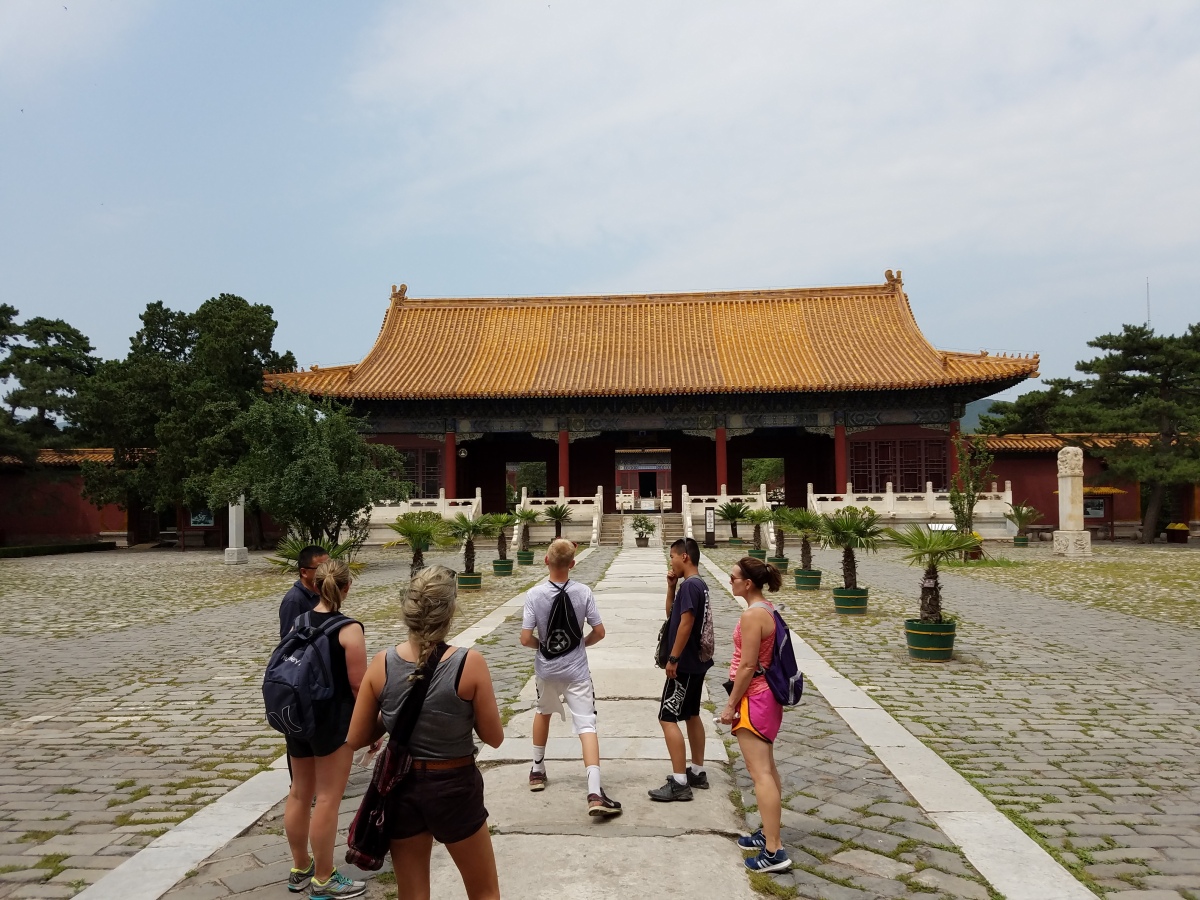 If you only casually collect tourist ideas, they tend to run together. So, when you ask your guide about seeing the Great Wall and then the terra cotta warriors, you’re saying something along the lines of “I’d like to see Memorial Stadium and then Chimney Rock, and then get some lunch”. So, when I had asked our guide to see “Ming’s Tomb”, thinking there was this one guy, Ming, and he had a tomb, hopefully with some cool statues that look way better than the frontage of a P.F. Chang’s. David, our guide, would re-assert about the Ming Tombs (plural) and then ask which one we wanted to see. I would dumbly shrug and mumble, “Whatever you think would be the best to see.” Admittedly, I was lost in the significance, which probably irked him that I was reducing a sizeable and meaningful chunk of history down to “whatever looks good on Instagram.” To add, we had just taken that fairly significant hike up and down a mountain to the Great Wall that morning and were way past our FitBit daily steps.

The Yongle emperor’s mausoleum occupies the largest area of all Ming tombs in the Tianshou Mountains north of Beijing. It is equipped with a double entry gate and most of the typical buildings used in Ming and Qing tombs.

The tomb has not been re-opened or excavated since he was entombed and has presumably not been robbed. Despite what you sometimes may feel about the Chinese government callously handling historical sites, they seem to be very cautious about excavating many of these sites until they feel they can properly do so without significant damage to whatever artifacts may still be present.

The common Sacred Way for all Ming tombs at Mt. Tianshou naturally leads directly to Zhu Di’s own tomb since he founded the entire mausoleum area.

The layout above ground follows his father’s mausoleum (Xiaoling) in Nanjing. South to north, the structures along the main axis are the front gate, Ling’en Gate, Ling’en Hall, the gate to the burial area, Lingxing Gate, the five ceremonial vessels, the “Square City” with the memorial tower (Minglou) on top, and finally the earth mound (“Precious Mound”).

The underground chambers were completed by 1411 but the above-ground structures were only finalized in 1418, seven years later.

Only three of the mausoleums around Mt.Tianshou have an extra front gate to the tomb site, Yongling, Dingling and Changling. This front gate has three openings and is covered by a single-eaved roof with yellow glazed tiles (see photo). The center gate -for the exclusive use of the Emperor and the Empress- is taller than its sisters on each side.

This is the main entrance of the ceremonial area of the mausoleum. It is also nicknamed the “blessing and grace” gate carrying the meaning of showing veneration to the deceased and in return receiving thanksgiving and blessing from Heaven to the mere mortals.

The gate was built in 1427 and has two horse mounting steles in front. The doors and pillars are kept in bright vermilion lacquer and the other woodwork is painted in the traditional green and blue colors with some gold colored accentuation. A plaque bearing its name is suspended inside the gate.

The gate is five rooms wide (about 31.44 meters) and two rooms deep (about 14.37 meters) and is surrounded by a white marble balustrade with three flights of stone. It is covered with a single-eaved gable roof covered with yellow glazed tiles.

Inside the gate and on both sides of the central Sacred Way are the eastern and western sacrificial burners. These are small ovens decorated with green and yellow glazed tiles. They were used to burn silk and symbolic paper money – a custom that has survived almost unaltered at most Asian graveyards all the way till today.

These traditional silk burning ovens -Shenbo ovens- have been fully restored and stand glistening in the sun fully covered in yellow ceramic tiles. They are larger than those in other Ming mausoleums in Shisanling.

The single-eaved structure stands on a base with Buddha carvings.

Ling’en Hall is by far the most magnificent and impressive above-ground construction of all the Ming tombs. Also called the “Offerings Hall” memorial tablets with the names of the tomb occupants were kept here in the Ming dynasty. Sacrificial ceremonies were held inside the hall on the anniversaries of the deceased. 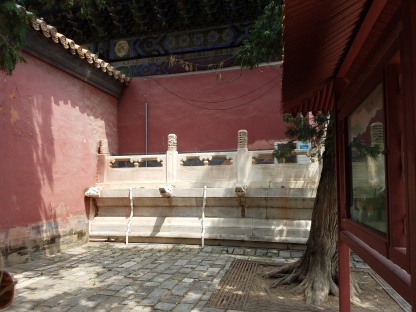 This large structure covers an area of 4,400 square meters. The main hall sits on a triple level balustrade of beautiful, white marble. Three flights of stone lead to the plateau of the hall itself.

The lower Danbi stone has two horses between the mountain ranges. Horses were not commonly used in the later Ming Danbi stones.

The center stairway is wider than the side ones and has in the middle of each level a Danbi stone block with engraved dragons and mountain tops.

The hall is a dazzling nine rooms wide and three rooms deep. One has to go to The Forbidden City to find larger Ming halls. The building is covered by a double-eaved hip and gable roof with yellow glazed tiles.

The inside of the hall is exquisite and unique. The entire structure rests on 60 large columns of precious nanmu wood, each one made out of a single tree trunk and 12.6 meters high. The four innermost columns are up to 1.12 meters in diameter! The columns are left in their natural state and not covered with the traditional vermilion colored lacquer.

In the center of the huge hall is an over-sized statue of Zhu Di -the Yongle Emperor- sitting on his imperial throne.

Also known as the “Double Pillar Gate” this particular structure symbolizes the importance of the tomb occupant. It has a hipped roof carried by an intricate composition of a number of interlocking wooden pieces. It is erected across the central spirited Sacred Way of the mausoleum.

The idea of this structure stems all the way from the Western Han dynasty (206 BC – AD 25). Its purpose is to solicit blessing from the Lingxing Star for a good harvest.

But Lingxingmen served another higher purpose. It was believed that evil spirits were only able to travel in straight lines. By placing Lingxingmen across the all-important center spirit axis of the mausoleum the evil spirits would be blocked and prevented from reaching the tomb mound and burial chamber.

The last structure in front of the tomb mound is the so-called “Square City”. It is a large, tall stone covered platform on top of which sits a tower called Minglou -or “Memorial Tower”.

The tower has an opening from all four sides although now the eastern and western accesses have been walled up. In the center of the building is a memorial stone tablet inscribed with “Tomb of Emperor Cheng Zu of the Great Ming”. The characters are huge, each one some 33 centimeters square. 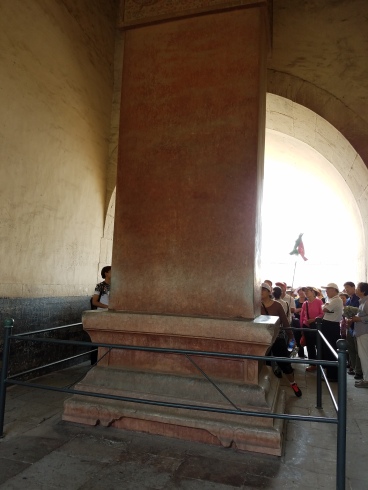 A hipped and gabled double-eaved roof with yellow glazed tiles cover the tower. Under the highest eave at the southern side is a plaque inscribed with the name of the tomb -“Changling”.